For Mother’s Day weekend we decided to go to the river. My parents have a trailer and a boat there and it’s an easy weekend getaway that we all enjoy. Introducing a two month old to it though?…brave (if I do say so myself). And let me tell you, it started out pretty rough.The plan was to leave Friday night around 9:00 so that both kids could sleep (our two month old usually goes down for his first long sleep of the night about that time). So Friday morning Austin (2 month old) and I got up early for us (we like to sleep in a little since we wake up at night) to go to his 8 week doctor’s appointment. We love our pediatrician and the appointment went well (Austin is healthy… yea!), but it lasted over an hour and he had to get four vaccinations! I know vaccinations are important but it’s just awful to watch your baby’s smiley face be overcome by a look of horror as tears start welling up in their eyes and then they let out this painful cry that seems to say how could you do this to me- I thought you loved me!?!
Then later that afternoon I was feeling unexplainably adventurous and ventured out to Target by myself with the two boys to pick up some things we needed for our trip. Parker was being impressively well-behaved and sitting still in the cart and helping pick out snacks. Austin was asleep. All was well. See? I can handle this. Ha! I didn’t get to enjoy feeling like a capable mother of two for very long before Austin woke up. Normally he wakes up happy, but today (maybe because of the vaccinations or maybe because I dared to go shopping) he woke up crying. So I quickly became the crazy lady in the store that is carrying a crying baby, while balancing a toddler and trying to shop. Oh yea!

In case you were wondering what his cry face looks like

In between excursions I was trying to get laundry done so we had clothes for our trip.  Even though I didn’t get a break all day, I also didn’t get any packing done.  So once Clint (my husband) returned home we had to have dinner, get the kids ready for bed and squeeze packing in there somewhere.  Long story short we hit the road about 9:30- both exhausted heading into our three plus hour drive. I took the first shift and Clint took the second shift. We were overtired but hanging in there until half an hour before we were due to arrive Austin wakes up crying. So we pull over so I can feed him at a rest stop near a prison… totally where I want to be in the middle of the night. I’m trying to feed him but he’s having trouble latching, which he never does (in retrospect I’m guessing he sensed my tension). Meanwhile the stop wakes up Parker who decides to start kicking my seat, and I’m in no mood to deal with it so I wasn’t exactly using stellar parenting techniques to handle it.
We finally get back on the road again, but by the time we get to my parents’ trailer it’s now after 1:30 in the morning, and saying we’re tired and cranky is an understatement. Parker is still awake from the feeding incident and just gets more wound up when he sees his grandparents. Austin wakes up with all the commotion. After briefly greeting my parents and getting necessities unpacked and beds setup we’re finally ready to get some much needed sleep. But do you think that happens? Of course not! First I should explain sleeping quarters at the trailer: Parker is sleeping in a portable zip up tent style bed on top of the fold out couch. We’re on a blow up mattress on the floor next to him. Austin is in his pack n play in the kitchen (or basically at the head of our bed), and my parents are in the bedroom just down the short hallway. Basically we’re all on top of each other which becomes painfully obvious when it’s the middle of the night and the kids are not sleeping (sorry Mom and Dad). I’m trying to settle Austin back down, but it’s hard because Parker is loudly talking and making noises like “ehhhh.” My favorite was the long and not so quiet dialogue he started about how we all needed to be quiet. Eventually Austin falls asleep but Parker is showing no signs of settling down. Clint and I try various techniques until we all are finally asleep about 3:30 in the morning. Happy Mother’s Day weekend! Great idea to try to do a family trip!
Fortunately God had mercy on me and things got infinitely better from there. The next morning my parents and Clint were feeling particularly generous and took care of Parker so Austin and I could sleep in a little. Then later that morning I was able to water ski for the first time since before I got pregnant with Austin! I found out I was pregnant in July and basically was unable to ski all summer. I was so tempted to ski too because I was in my first trimester and didn’t have a big belly yet to throw me off balance, and I’ve been skiing since I was little and never fall, but I just couldn’t take the risk. Anyway, skiing was amazing! The water was glassy and it felt great to be a “normal person” if only for a few minutes. Parker enjoyed riding in the boat, playing in the sand, and splashing in the water. Austin really had no idea we were even at the river, but he was content. I even got to have a nice chat with my mom in the afternoon. I don’t get to talk to her nearly enough these days so that was a real treat! And this time at the end of the day the boys went down without any trouble and my mom and I got to enjoy carne asada tacos prepared by our loving husbands. 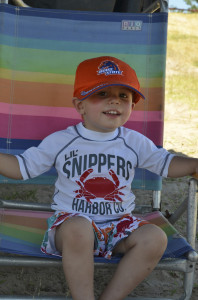 Parker kickin’ it at the river 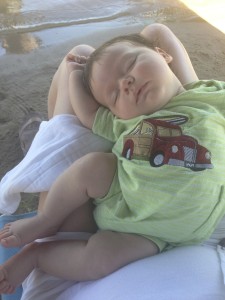 Austin relaxing at the river 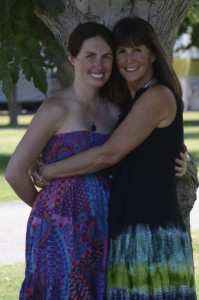 Me and my mommy 🙂

Then it was Mother’s Day.  Normally the day we leave isn’t truly relaxing because we spend most of our time packing and even the time we spend relaxing we’re watching the clock. However, this time it felt like we actually were able to enjoy our last day, which was such a gift. We didn’t end up leaving until 4:00 but that was ok. This time for the ride home we’d already braced ourselves for the fact that multiple stops may be necessary, but it actually went pretty smoothly. Both boys slept well and we were able to make it to a BJ’s only an hour from home where we stopped to have our Mother’s Day dinner and feed Austin. I had my favorite pizza (The Sweet Pig, which is basically a super delicious Hawaiian) and of course I had to have a Mother’s Day Pizookie (if you’re not familiar, this is a cookie baked in a small pizza tin and topped with ice cream… SOO good!!!).

We made it home about 8:30, and I have to say that despite the rough start I had a very nice Mother’s Day weekend.  I hope you did too!