I have grand visions of being super mom and singlehandedly caring for my kids and our home, but let’s face it, I am not super mom. I don’t think God ever intended for one person to manage it all themselves. Let’s take the fact that it takes two to conceive a child- in theory actually, two people in love. Are two people enough to raise a family? Two people can do the majority of the work, but no, I don’t think parents were meant to go the road alone. We have been so blessed over the years with all the love and support we have received. I could use a million examples, but we just had a crazy weekend that we only survived with help from others, so I’m going to use that as my example.

Since our Mother’s Day road trip went so well we decided we were ready to take it to the next level. Haha! Actually it was my Grandma’s 80th birthday, and we needed to hit the road again to share in her celebration. I knew how important this was to my grandma and that it would be an opportunity to get together with family that I rarely get to see, but the logistics of it all were challenging. We decided the only way to survive it was to take Friday off and break up the drive. So we called Clint’s brother and sister-in-law who graciously agreed to let us invade their home. It was wonderful to get to spend time with them, and Parker had an absolute blast playing with his cousin! 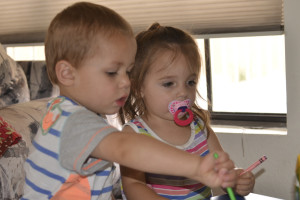 When we arrived at my Grandma’s party the next day it was time for Austin to eat and for Parker to nap, or basically disaster in the making.  Fortunately though, we had the support of a whole crew of people who understood exactly what having kids is like.  I should mention that my dad is one of six, and those six have well… gone forth and multiplied.  So when lunch was served and I had Parker in my arms (so he could see and select what he wanted), as well as two plates (one for me and one for Parker), and somehow was supposed to get food on the plates… oh yeah, and not completely hold up the line of people… a family member jumped in and was literally filling my plate for me… so nice!  When Austin spit up and I failed to have a spit rag on me, someone was there with a napkin.  When Parker was struggling to sit still and eat, someone was there to lend a hand.

What a joy to be surrounded by family!  Even just looking at my aunts, uncles and cousins was encouraging to me… seeing other people who also value family and keep that as their priority despite the challenges involved.  These people are such a part of who I am even though many of them I rarely get to see.  With them all around me, I was home.  I also should mention how awesome my husband is.  Here he is exhausted and amongst all of these people he doesn’t know, and yet he jumps in to help as needed… watch the kids so I can visit, take pictures of everyone, and be the charming man he is who manages to make friends with everyone along the way. And on our drive back when we had to stop to feed Austin and Parker was falling apart, my parents took Parker in their car so he could wind down and sleep and we could feed Austin in peace. 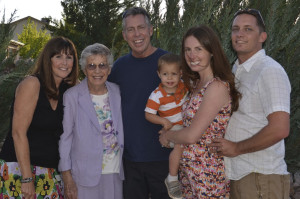 The family with Grandma (Austin was resting)

The weekend ended with our friend’s baptism.  Not only was this a super important event that we did not want to miss, but Clint was also his sponsor.  However, we had just returned home from our road trip and the kids were pretty much over sitting still and generally exhausted, not to mention how tired we were.  Usually surviving church with kids takes a team effort, but Clint needed to sit by our friend since he was the sponsor, which left me more than a little concerned about how this was going to work. I didn’t realize it yet, but God had a whole support team lined up for me.

Church was barely starting when things got interesting.  Right before the procession Parker decided it was a good time to send his little construction truck flying into the aisle where they were about to walk. Fortunately someone grabbed it and brought it back to us before anyone tripped and fell.

Shortly thereafter I was nursing Austin and had given Parker a snack to encourage sitting still, but when Parker finished his snack he decided he wanted to go throw the trash away, so he went bolting from the church. If I ran after him I would have flashed the congregation (not ideal), but before I could panic a guy from across the aisle went running outside after him. I still went hurrying outside as soon as I could make myself decent, and the guy was bringing Parker back for me. He said, “Wow, he’s fast.” Yep! 🙂

Then when I was at the back of the church trying to calm Austin and keep Parker by my side, Parker started loudly announcing that he needed to go potty, so a nice lady offered to hold Austin so I could take Parker to the bathroom. When I handed him over the person next to her said, “You’re so lucky!” referring to the fact that she got to hold him.

It amazed me how throughout the whole crazy mass everyone was incredibly patient with us and never acted irritated despite all the drama. The people behind us even helped entertain Parker and stand guard to make sure he didn’t fall or run off again. It felt like the whole church was pitching in to support us, so even though it was far from my ideal church experience, I was so touched by everyone’s kindness that it made all the difference. 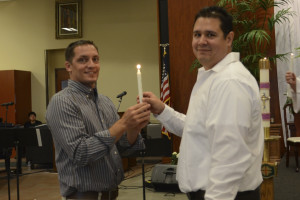 As I left mass that day and reflected on the weekend, I couldn’t help thinking it really does take a village to raise a child. I know that my children will become the best versions of themselves not by me figuring out how to be super mom, but through the love we give them despite our imperfections and the family, friends and strangers who touch their lives along the way. We can’t do it alone, and that’s ok because we are blessed to be surrounded by so many people who are more than happy to step in when we need a hand.