I’ve always loved the holidays, though I must admit that the experience has changed quite a bit over the years. When I was younger, everything was magical and perfect, and I was largely unaware of all the work behind the magic. Nowadays my husband and I are the work behind the magic— making the holidays special for our kids, and subsequently for us as well. From our perspective, the day before Thanksgiving looked like this: Clint and I both worked in the office all day. Then Clint picked up the kids and started dinner. When I got home, dinner was still cooking, so I helped watch the kids and tried to start on the packing. [Note: Yes, we should have packed sooner, but I spent all my free time the previous day doing laundry so we would have something to pack.] Then dinner, bath for the kids, more packing, more kid watching, nursing, and eventually hitting the road at 9:00 for a six hour drive. From my Parker’s perspective: he played with his friends at school, came home and played some more, had dinner, took a bath, played some more, then fell asleep in the car… when he woke up, we were there. Magic. 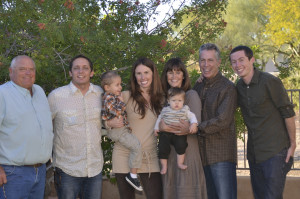 Us with my parents and brother and Clint’s dad 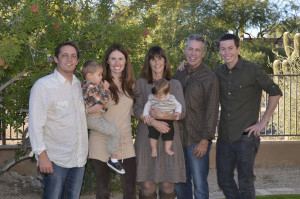 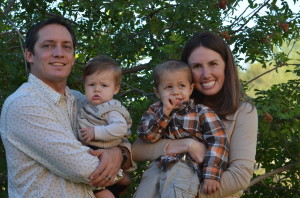 A few years ago, a wonderful Thanksgiving tradition developed. Clint’s brother (Luke) and sister-in-law (Katie) now host Thanksgiving, and not only do they welcome us into their home, but they invite Clint and Luke’s dad (their mom passed away shortly before I met Clint), Katie’s parents and sister (plus her kids), and my parents and brother. What a gift that each of us gets to have our parents and siblings at Thanksgiving! I feel so blessed that we don’t have to choose between my family and Clint’s family… we get to celebrate with both, and everyone really enjoys each other too! 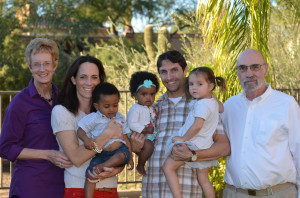 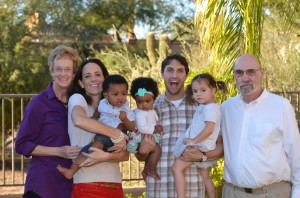 This picture cracks me up 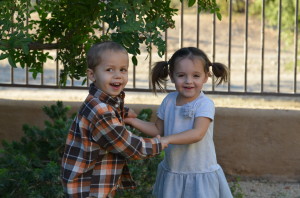 One of the best parts about Thanksgiving for Parker is seeing his cousin Quinn. He absolutely adores her (and vice versa). He said, “I love Quinn. She is the best!” and when he woke up the day after Thanksgiving, the first thing he said was, “Where’s Quinn?” They just laugh and laugh when they see each other, and they play so well together! Quinn was so sweet with me too— she kept wanting Aunt Jenn to play with her. I do love being an aunt, and she was my very first niece. We also got to spend time with our newest niece and nephew, Aya (9 months) and Jack (1 year) who we’ve been hearing about and seeing pictures of for over 6 months, but whom we only got to meet about a month ago when Luke and Katie finally got to bring them home from Ethiopia and unite their family. Jack has absolutely blossomed in the month that they’ve had him home— he went from not being mobile, to crawling, and then walking, and even starting to talk!! I heard him say ball (baw baw) and no (nuh nuh nuh nuh nuh). He was even throwing the ball! Aya is very sweet and smiley. She loves to vocalize and cuddle with mommy and daddy. Thanksgiving Day was a crazy mess of kids everywhere, but we loved it, of course. 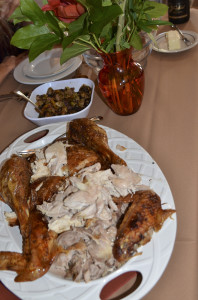 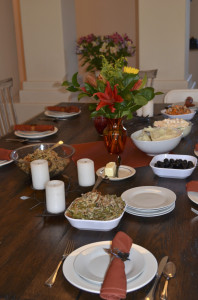 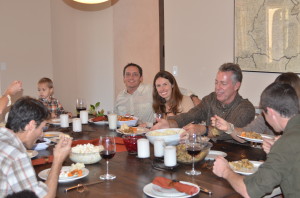 You can’t talk about Thanksgiving without talking about the food, and it was delicious! We had turkey two ways: the classic oven roasted turkey and a deep fried turkey. I have to say the deep fried one hit the spot for me— the crispy outside was ridiculously good— all drowned in gravy, just the way I like it. We had some great chef’s at work. Luke deep fried the turkey, Katie’s dad made fresh bread rolls for us, and Katie’s close friend (with her team of sous chefs) roasted the turkey and made a lot of the fixings as well as a handful of pies. I don’t think Parker or Quinn ate much of the dinner. Austin nibbled on some bread. Later everyone enjoyed the pies though… even Austin… it turns out he likes pumpkin pie :). The night ended with all the kids in a bath together, which was hilarious. 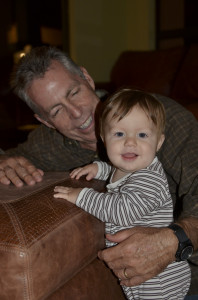 Austin with “Grandpa with the boat” 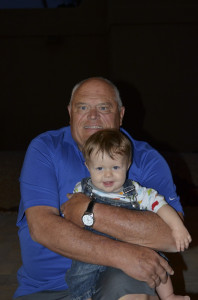 Austin with “Grandpa with the big dogs”

The next couple days were all about relaxing at Clint’s dad’s house (where we stayed). Some of the highlights of the first day included a family walk, the boys hitting some balls at the driving range, and more good food (Clint’s dad made us turkey enchiladas, homemade beans, and corn bread). It was nice to slow down and just be together. However, when you have kids there is always some sort of drama, and that day we experienced the cat incident of 2013. Parker is in a big time kitty phase and has been for a while. So when he discovered Clint’s dad’s cat, he was thrilled. He laid down next to the cat, hugged the cat, pet the cat, and carried the cat. He and Cider (our dog) even tried to get the cat to yawn (which is apparently what he thought the cat was doing when she hissed at Cider). The cat was so patient with him and so sweet, but somehow it went awry, and she swatted at Parker and scratched his head. He was devastated . He cried and said, “I want to go home,” while clinging to us and Cider. It was heartbreaking. Clint decided to take action, and he had the cat “apologize” to Parker and explain that she got scared and was sorry she hurt him. Parker gave her a pat and forgave her, but he wasn’t quite ready to hug her and start playing again. I was afraid he was going to be traumatized, but the next day he was back to playing with the cat, and he said the best part of the trip was the cat, so I guess we’re ok… phew. 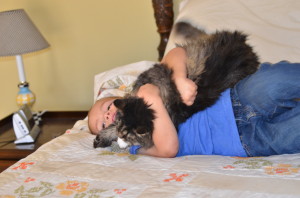 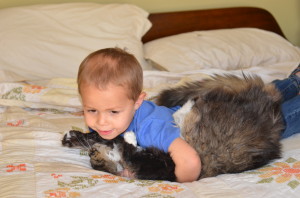 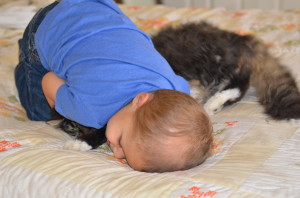 Day two post Thanksgiving involved a bourbon and maple syrup glazed smoked ham that was the perfect combination of salty and sweet, a haircut for Clint and Luke at Luke’s fancy man-friendly barber shop (you can actually get a shave and a haircut), another family walk, and a visit from Luke and the kids (Katie was not feeling well). Parker and Quinn began making a dog soup (or basically putting dog food in a bucket of water and stirring it with sticks) and were perfectly content. The two newest family members are very attached to their mommy and daddy, which is a critical part of the adoption process, but unfortunately it meant Luke had his hands full, especially being in a house that doesn’t have a good play area for the kiddos. All in all a nice day though, and we actually hit the road a couple hours earlier than we did on our drive out. Driving with Austin is always interesting because even though he’s generally a pretty happy kid, he doesn’t travel well in cars. We ended up with Austin waking up three times on the drive, but we still made it home a little after 1:00 in the morning, which isn’t too bad considering. Now for the worst part of travel: unpacking… ick.
Hope you all enjoy the rest of your Thanksgiving weekend as well as this first day of Advent!