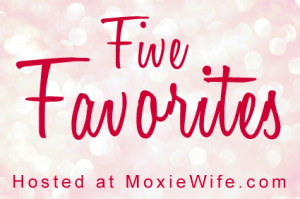 Some of my favorite gifts to give are ones that create opportunities for me to spend time with my loved ones. As I thought about what to get my family (referring in this case to my parents and brother) for Christmas this year, I realized that what we all really needed was more time together. That’s when my husband and I came up with the idea to get us all tickets to Sea World. Our kids had never been to Sea World, and we figured they would love it, and how great would it be for my family to be able to join us? Sea World was particularly appealing because when you buy a regular admission ticket it automatically gives you free access for the remainder of the calendar year (or basically a 2014 annual pass). This way we hoped we could actually extend the gift into multiple family fun days.

So this past weekend we took out first trip to Sea World, and here are my five favorite moments from the trip:

We started off the day doing something very “un-Sea-Worldy.” We went to the Sesame Street play area. There were no lovely sea animals to check out there, but there was a huge climbing structure, a bouncy house, and rides. As ridiculous as it seemed to start off a day at Sea World this way, it was definitely the way to go for us. Parker was all wound up after a long car ride and with the excitement of going somewhere with Grandma, Grandpa and Uncle Justin. This gave him the perfect opportunity to work through all that good energy so that he was ready to enjoy the animals. They even had an area where Austin could climb around. And I have to admit I liked climbing and riding the rides too. 🙂 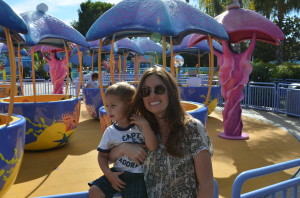 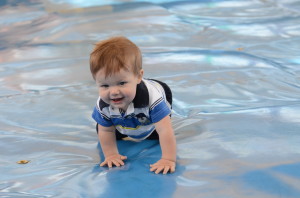 Austin enjoying the play area for the younger crowd 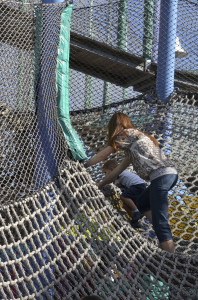 The number one priority on our list was seeing Shamu, so we went to the whale show right after Sesame Street. The show was fabulous! It’s hard not to be mesmerized by huge whales moving gracefully through the water, and the look of amazement on Parker’s face made it even better. Austin was such a trooper too. It’s hard to say what he could see and what he made of the whole thing, but he sat on my lap in the Bjorn just quietly watching. 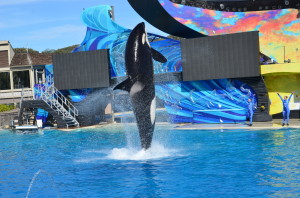 We enjoyed some lunch next, and then we decided to do some exploring before the Sea Lion and Otter show (priority #2). One of my favorite things about Sea World was that everything seemed more low key and accessible than at other amusement parks, although I suppose it could just be quieter there this time of the year. I loved that you could just walk up to Sea Lions, star fish (that you can hold), turtles, flamingos, etc. No lines; no waiting. One of the coolest areas that you could walk through was the shark exhibit. After viewing the sharks from up above, you can go down below and view them up close and personal. Parker was fascinated and so were we! 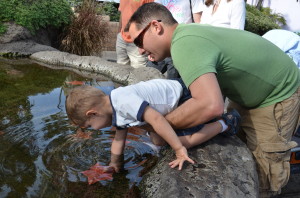 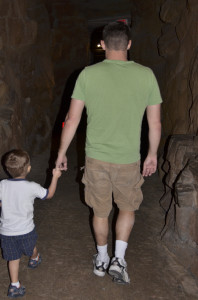 Parker and Daddy walking together down to the lower shark area 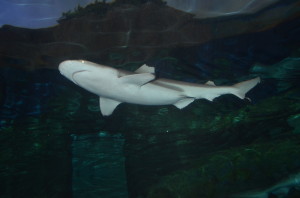 After that it was time for the Sea Lion and Otter show, which was just as fun as Clint and I remembered it being. We got there about a half hour early and were able to enjoy some pre-show entertainment. First a new trainer was practicing tricks with one of the sea lions. Then Biff came out. The Biff character is supposed to be a member of the stage staff that is cleaning and preparing for the show but gets distracted. He was accidentally-on-purpose spraying water on guests while he was cleaning. Then he decided to listen to the “Sea Lion’s favorite CD’s” and began to act out the movie scenes that corresponded to the songs. All this before the show even started! The antics continued once the show started, and they did some funny plays on popular TV shows with the Sea Lions as the stars and the little otter as an amusing supporting character. In contrast to the majestic whales that captivated us, this show had us cracking up from start to finish. Whereas some of the humor was aimed at adults, the boys definitely enjoyed it. I was amazed how well Parker could sit still when he was interested in what was going on. Even Austin sat still no problem. 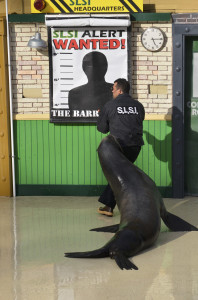 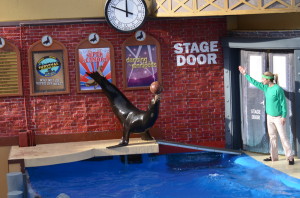 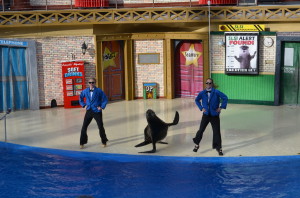 As much fun as the shows were, the highlight was truly being together as a family. Clint and I enjoyed reliving some of our favorite childhood memories and being able to create new memories together as a family. Having my parents and my brother there was such a treat too. It was wonderful to get to visit with them and for them to be able to be a part of all these special moments with the boys. Sometimes an activity like this can be more exhausting than fun, but it really turned out to be a special family day, and I was so glad. As a bonus, my family watched the boys that night so Clint and I could have a much needed date night. 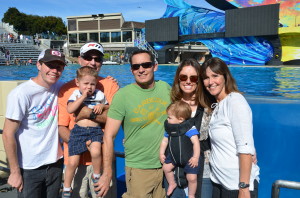 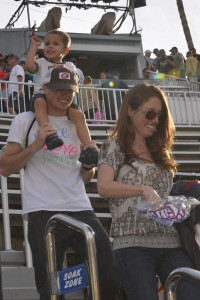 Uncle Justin made for an excellent drum for Parker 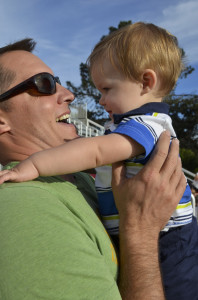 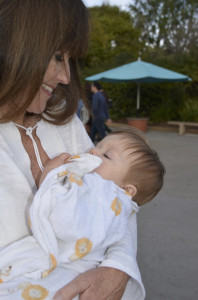 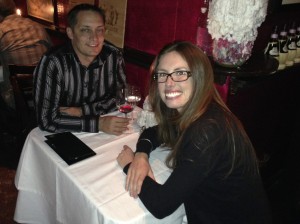 Later that night out on our date night 🙂

For more favorites, head on over to Hallie’s.

P.S. We did see the dolphin show at the end of the day, which was good, but it didn’t seem to compare to the other two shows. Maybe it was just because we were all exhausted at this point? We left Sea World immediately after because somewhere during the show we all seemed to hit our wall. 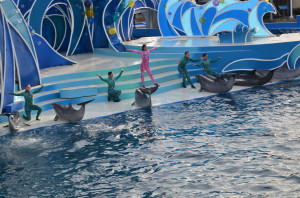 P.P.S. Yes, I know it’s January, but we’ve been having a heat wave. Made for perfect weather for a day at Sea World… we lucked out!