I’d like to share about my experience so far balancing a toddler and an infant as I know I was wondering how that would work when I was pregnant with Austin. However, I have to add the disclaimer that I think a lot depends on your particular circumstances, especially the personalities of your children. Also, if you’ve been reading my blog you know it doesn’t always go smoothly, but I still hope some of my experiences might be helpful for those preparing to balance more than one child.

We started talking to Parker fairly early in my pregnancy (toward the end of the first trimester I believe) about the baby in mommy’s tummy. I had heard that children often expect babies to come out ready to play, so I tried to paint the picture for Parker that the baby wouldn’t know how to walk or talk yet, and he would need to help teach him. We spoke about the baby with him on a regular basis, and Parker would hug my tummy and talk to the baby. We also read several books to him about becoming a big brother and those also helped us explain to him what having a baby would be like. If you’re looking for ideas, the books we used are: I’m a Big Brother, My New Baby, Hello Baby!, and Waiting for Baby. Parker started to refer to Austin as his baby and talk about how Austin was his brother, not Mommy’s brother and not Daddy’s brother. In the end it seemed that Parker understood the concept of a new baby as much as you could expect a 2 year old to. In fact, when he woke up to find his grandparents at the house he immediately knew that meant that Mommy and Daddy had gone to the hospital because it was time for baby Austin to come. I was also impressed that when Parker met his brother he understood that the baby was not in mommy’s tummy anymore. 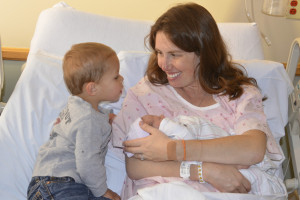 It took a little while to recover from birth and to adapt to balancing two. Clint was home with me the first two weeks, and we had Parker attend preschool in the mornings. I do recommend getting whatever help you can, especially for the first month. When both of us were at home it was relatively easy to handle the kids as one person could manage one and another person could take care of the other one. Of course, the day had to come when I dared to take on the feat myself, and I’m finally feeling pretty comfortable managing two on my own now. 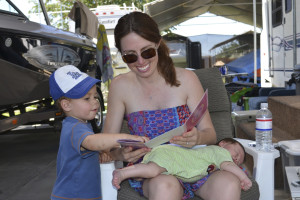 Breastfeeding is important to me, and I was wondering how that would work with a toddler around. It’s actually gone fairly well. Parker loves to read, so we often will read books while I feed Austin. Sometimes Parker will play happily on his own if I sit on the floor near him. I’ve also discovered you can play catch while breastfeeding… who knew! If it’s snack or meal time for Parker, I will just sit in the chair next to him and feed Austin while Parker eats. Fortunately Austin is also patient enough to allow me to set him down in the middle of a feeding if I need to take care of something, but I know that won’t work for all babies (Parker did not handle feeding interruptions well when he was a baby). As a note, it does help to have multiple options for setting your child down, although it doesn’t have to be anything fancy. Personally we use blankets, a swing, a bouncer, and the Bumbo Seat (all of which were given to us as gifts when we were pregnant with Parker).

When Austin and Parker are both awake I find it works pretty well because Austin is fascinated by his big brother and is generally happy watching Parker. I’ll take them to the park sometimes, and I use our BOB Duallie Stroller for that. However, if we leave during Austin’s awake time I generally prefer to put him in the Bjorn (I like the one with the back support). He rides in his car seat in the stroller, so he can’t really see much other than the sky, but in the Bjorn he can look around. When he gets tired he just falls asleep. He’ll remain happy in the Bjorn for a long time if we’re outside and moving (even if it gets to be eating time).  Also, having him in the Bjorn keeps my hands free so I can take care of Parker. I look pretty silly with my double stroller, Bjorn and dog, but hey, it gets the job done. When I take them to the grocery store I find it works better if Austin sleeps so I can just focus on Parker (who fortunately is getting pretty good at staying within sight and generally following directions). However, I’ve also been with Austin awake, and he was not happy sitting in the car seat for any extended period of time, so I was carrying him and steering the cart with one hand (plus a foot), but it really wasn’t too bad. In the future I’m going to bring the Bjorn if Austin is awake.

As far as the evening routine, here’s how it normally plays out for us. First, Austin is often due to eat about dinner time, so I will regularly find myself eating with one hand. I had done that previously with Parker, so that wasn’t a big adjustment. If Austin is awake but doesn’t need to eat during dinner, then he’ll kick it in the swing, be our little center piece in his Bumbo chair, or just hang out on one of our laps. After dinner we do bath time, and Parker goes first. Occasionally Austin’s eating time will run into bath time. Fortunately Parker is getting better about undressing himself, so all I really have to do is fill the bath to get him started. I just use natural breaks in Austin’s feeding to wash Parker and get him out of the bath (setting Austin in the bouncer). If Austin is doing awake time during Parker’s bath, then he’s pretty happy watching Parker in the bath. Once Parker is done with the bath and in his pajamas, then it’s time for Austin’s bath, which Parker likes to help with. We just use a baby bath that goes in the sink and Parker sits with me and plays. As a note, I’ve also put on a swimsuit and sat in the bath tub with Austin in my lap and bathed Parker and Austin together (if you’re looking for a way to do both baths at once). After Austin is done with his bath and in his pajamas then I take them both up for bed. If Austin is up to it he can join us for our nightly reading, but generally speaking he’s ready to sleep, so I just put him in his crib. Then Parker and I do our bedtime routine, and usually the boys go to sleep about the same time and in the same room, which is super cool to me. 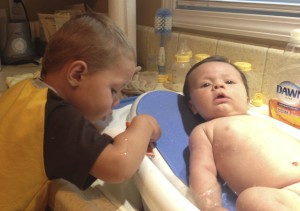 Parker playing with his car while Austin takes a bath 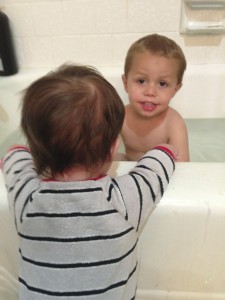 Everyone has to find what works best for their family, but hopefully this will offer some ideas of ways to make it work. If nothing else, I hope you take from this that it is possible, and it will get easier. If you have any questions, feel free to ask.

Real Motherhood: A sick infant and a tired toddler

Jenn’s Tips (Vol. 6): Clothing a family on a budget

One thought on “Jenn’s Tips (Vol. 3): Balancing a Toddler and an Infant”