It feels so good to sit at the computer and finally be able to write a post. There was a time when I felt called to take a break, but this time my writing has been sporadic out of necessity. I have had so many thoughts bouncing around in my head and begging to be put into words, but alas, my opportunities to write have been limited. I’m trying to make taking care of myself by exercising and having quiet time more of a priority though, and sometimes that quiet time leads to writing, so hopefully you’ll be hearing more from me in 2015. Long story short, yes I know we just celebrated the beginning of a new year, but I still want to record our first holidays in our new house, and that began with Halloween…

So far it appears this house was meant for holidays, and our celebrations started with Halloween. First we sought out a local pumpkin patch. Both kids were immediately drawn to the mini petting zoo they had. Austin has been particularly interested in animals lately and is having fun learning their sounds, so it was perfect for him to get to see the animals in person. With Daddy for company, Austin enjoyed interacting with and observing the animals. Parker was especially taken with a playful baby goat. After the animal fun, it was time to check out the various blow up slides and obstacle courses that they had. Parker went down a large blow up shark slide totally fearlessly, and then the boys happily played on one of the obstacle courses for a while. At the end, the kids made their final pumpkin selections (we encouraged them to choose from the reasonably priced kid size pumpkins, and we picked up our main carving pumpkins from the grocery store). 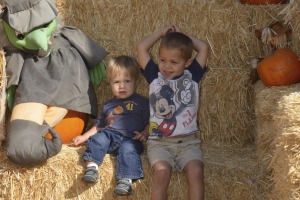 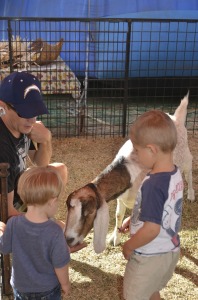 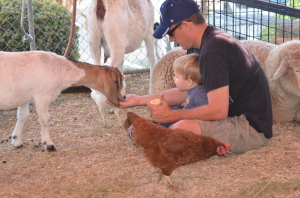 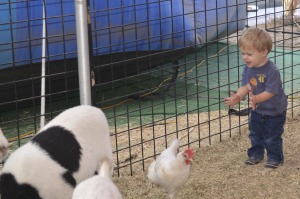 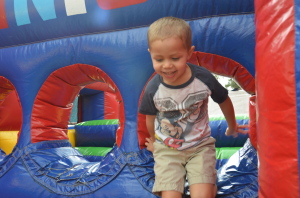 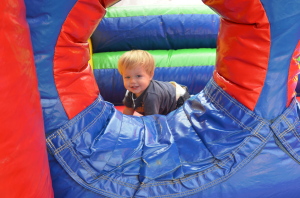 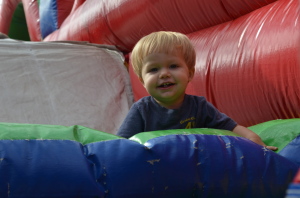 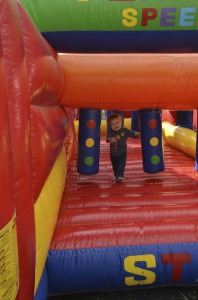 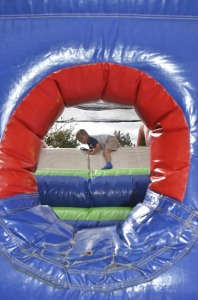 Austin seeks out the perfect pumpkin

When pumpkin carving time came, Parker picked the cat design (no surprise there). He and Daddy scooped out the pumpkin seeds and other innards, and then Parker and I got to work on carving. Meanwhile Austin flipped through the booklet of designs and then began to grab at all sorts of stuff that was not for him. While Parker and I were getting our design situated onto the pumpkin, the doorbell rang and it was Chamberlyn, the four year old girl who lives across the street, and a few minutes after that her brother Lincoln, seven years old showed up. We invited them both to join us for pumpkin carving, and the kids had a great time carving together. Before we finished though, the neighbors had to leave and Parker’s interest began to wane, so Mommy finished carving the cat. Later that night, Clint carved his pumpkin: a fun jack-o-latern. The perfect end to our evening was enjoying our fresh baked pumpkin seeds.

Mommy and Parker carve our pumpkin 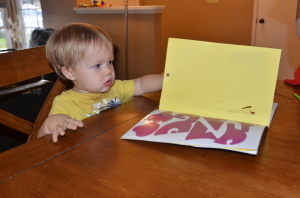 Austin flips through the book of patterns 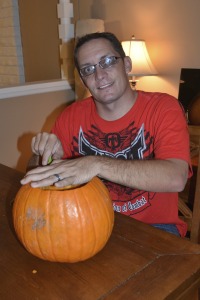 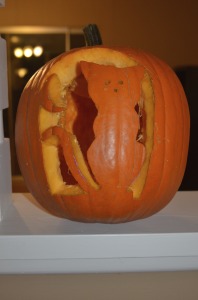 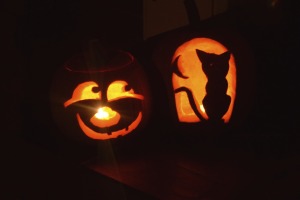 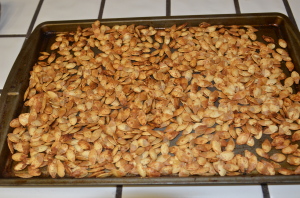 An amusing note: Clint kept eyeing the blow up Halloween decorations every time we went to Home Depot (which when you’re buying a house becomes your new hangout). Being the supportive wife that I am, I teased him and insisted that we did not need a crazy blow up decoration. As I’m loading stuff into the back of Clint’s truck one day I notice a box with a blow up cat in it and laugh, “So were you going to wait until I was in a good mood and then tell me about that?” Apparently Clint has been dreaming of a ridiculous blow up decoration since he was little because his “neglectful” parents didn’t buy him one, and now that we had a house he was ready to realize his dream. Not one to stand in the way of dreams, I introduce you to our cat… 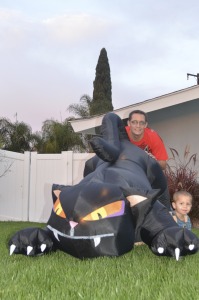 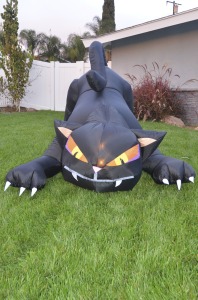 It’s eyes glow and it’s head turns from side to side… what more could you ask for?

Halloween day finally arrived, and I hurried to pick up the kids from school and get home. Meanwhile, Clint picked up a pizza for us. We ate as soon as we got home and then quickly changed the kids into their costumes. We wanted to get out trick or treating as soon as possible so the kids wouldn’t be too exhausted. This year Parker wanted to be a Ninja Turtle (Michelangelo to be exact), and Austin used Parker’s old Tigger costume. Austin had been going through a phase of not liking to wear clothes, so you can imagine how he felt about a costume.

Previous years we’ve always had to drive to our trick or treating location, but this year was amazing: we just walked out the door. To make it even better, our neighbors (Chamberlyn and Lincoln’s family) invited us to join them. This meant Parker automatically had friends with him and so did we, plus we had a guide to show us where to go and keep us from getting lost. The streets we walked through were so lively too, with multiple front yard gatherings. Parker has always taken a little while to warm up to trick or treating before he gets into his groove, but this year there was no warm up period– he just started running off with his friends. Austin, on the other hand, was not interested in trick or treating, but he was very content hanging out in the stroller and taking everything in. We were all beat by the end of the night, but we had a great time. We got sprinkled on a little while we were out, but fortunately we made it home before it started to pour. 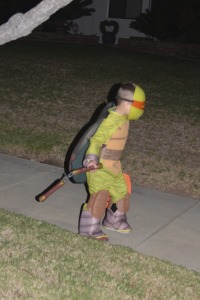 Watch out… there’s a Ninja Turtle on the streets!

Trick or treating with no fear 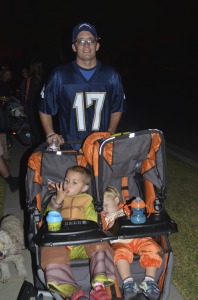 Austin asleep and Parker snacking at the end of the night

I hope everyone has been enjoying the holidays! Next up… Thanksgiving at our house…