It is so hard to believe that it has already been a year since Austin’s eventful birth. This precious time with him has been absolutely flying by, but it sure has been fun watching him learn new things and seeing his sweet little personality emerge. No words could ever capture the love we have for our beautiful boy.

We of course wanted to celebrate his first birthday, but the question was how because we really hadn’t thrown an official kids’ bday party yet. Parker’s birthday is within a week of Clint’s birthday, and both fall around Labor Day weekend, so Parker’s birthdays always end up being a weekend at the river with family (we can’t miss a 3 day weekend at the river, that’s how Clint wants to spend his birthday, and Parker loves the river and being with his relatives). For Parker’s 3 year old birthday we thought we should do something other than just the river, so we ended up going to Disneyland (just the 4 of us) because Parker is really into Mickey. That was fun, but still, we didn’t exactly throw a party. I knew I wanted to keep Austin’s birthday simple because planning elaborate parties stresses me out, and I figured Austin would prefer to just have a casual day with a few people he knows anyway. So we settled on an afternoon with family at a local regional park. Clint’s family was invited, but since they are not local it wasn’t practical for them to come. Thus the attendees were my parents and my brother. 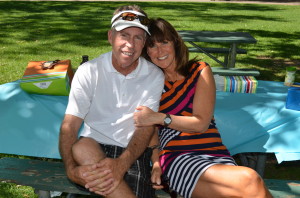 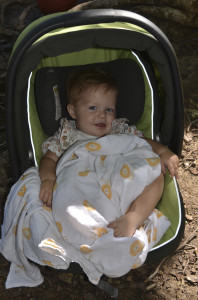 Austin waking up from his nap 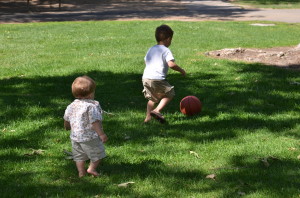 The boys playing ball together 🙂 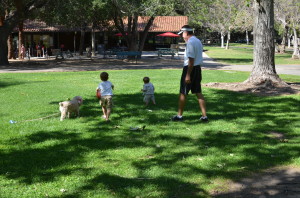 My dad and our dog Cider join in on the fun

We all got to the park on Sunday (the day before Austin’s official birthday) about 10:30, just as he was just waking up from a short morning nap. Once Austin woke up, he was ready to walk around and explore (as fast as those little legs could take him). Meanwhile my brother took Parker on a skate board ride and the adults chatted. The boys then played ball together for a little bit, which was adorable. While everyone was still fresh and clean, we decided to take a few family pictures. It’s so hard to get a decent picture of all of us, but these didn’t turn out half bad. 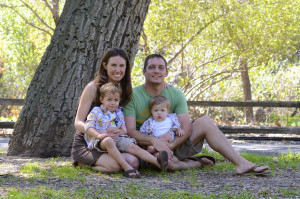 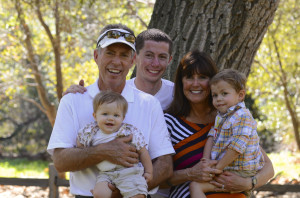 Me and my bro 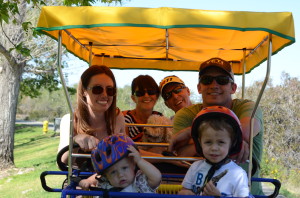 After pictures we decided to splurge and rent one of the Double Surrey Cycles that I’ve always wanted to try. The boys sat in the front, Clint and I pedaled with my parents, my brother rode his skateboard alongside, and our dog ran next to us until she pooped out and hitched a ride. We were a pretty funny sight. It was definitely a workout, but we had a blast. Trying to coordinate all of us in this big awkward vehicle was hysterical. I was particularly amused when my dad took a turn on the skateboard, but it turns out he was a pedaling slacker, so we were glad to have Justin’s youthful strength helping us out. It seemed that the boys were enjoying themselves as well. Austin kept looking back at me and smiling. 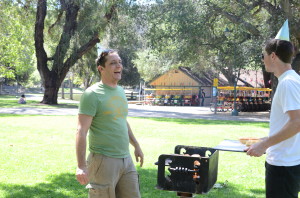 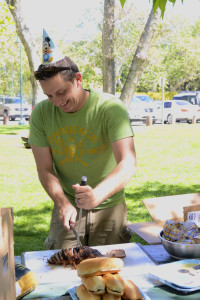 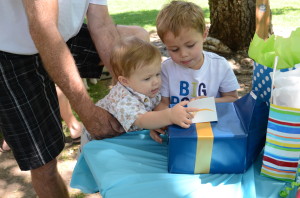 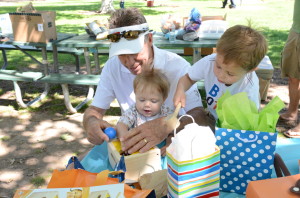 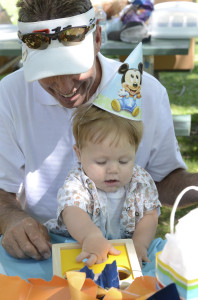 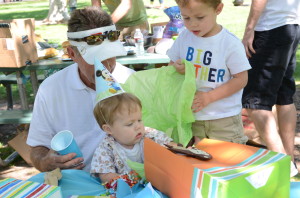 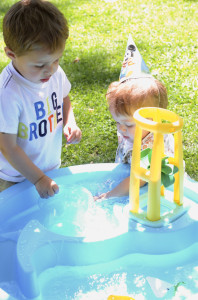 The boys enjoying Austin’s present from mom and dad 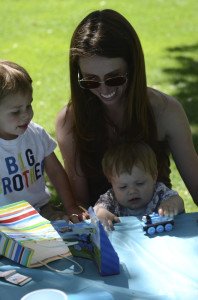 His brother got him his own Thomas train (probably so he would stop stealing his ;)) 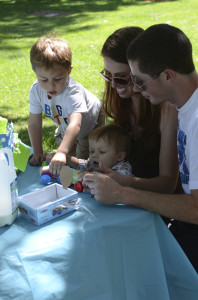 After about 45 mins of riding we were all ready for lunch. My awesome husband had barbecued some tri-tip for us that morning, and at the park he toasted up some rolls with garlic butter for our sandwiches. It was ridiculously good! As lunch was being prepared Austin opened his gifts. Surprisingly he’s not that into unwrapping, but his brother definitely is, so he had some help. 🙂 Austin did seem delighted with his new toys once they were open though. 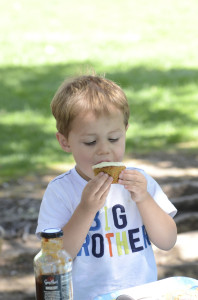 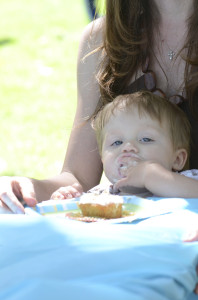 I think he likes it 🙂

After lunch it was time for the official carrot cake cupcake birthday dessert. Austin devoured his…. success! We hung out for a little while longer, but it was getting late, so we needed to get the boys home for nap. It was a short but sweet little celebration, and I think Austin goob had a nice time. 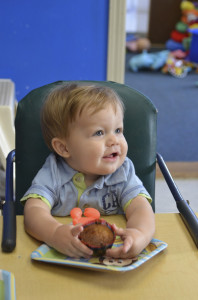 Enjoying his second round of cupcakes at school 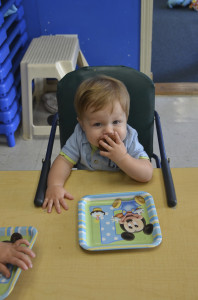 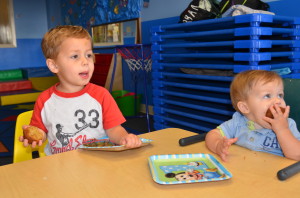 The next day, Austin’s birthday/ St. Patrick’s Day, I was able to get off work since I had to work the previous Thursday (my usual day off). I still took the boys to school so Austin could celebrate his birthday with his friends and Parker could enjoy his St. Patrick’s Day party, but I stayed with them. Shortly after we arrived (we took our time getting to school that morning), it was party time. Austin sat at the table with his friends, and I got permission for Parker to join us. I served the cupcakes, and we all sang “Happy Birthday” to him. Austin seemed delighted and enjoyed day two of carrot cupcake yumminess. Parker went back to his classroom after he finished his cupcake, but I hung out in Austin’s class with him. He would go play, then run over and give me a hug, then play and hug again. I think he really enjoyed having me there, and it was fun for me to get to see him with his friends. We went home for lunch and nap, and after nap I took the boys to play at a park for a little while. I think Austin could tell that it was a special day, and I was glad to be able to share it with him.

Happy first birthday to my sweet Austin!
Thanks for stopping by Little Silly Goose. I hope you're enjoying your visit. 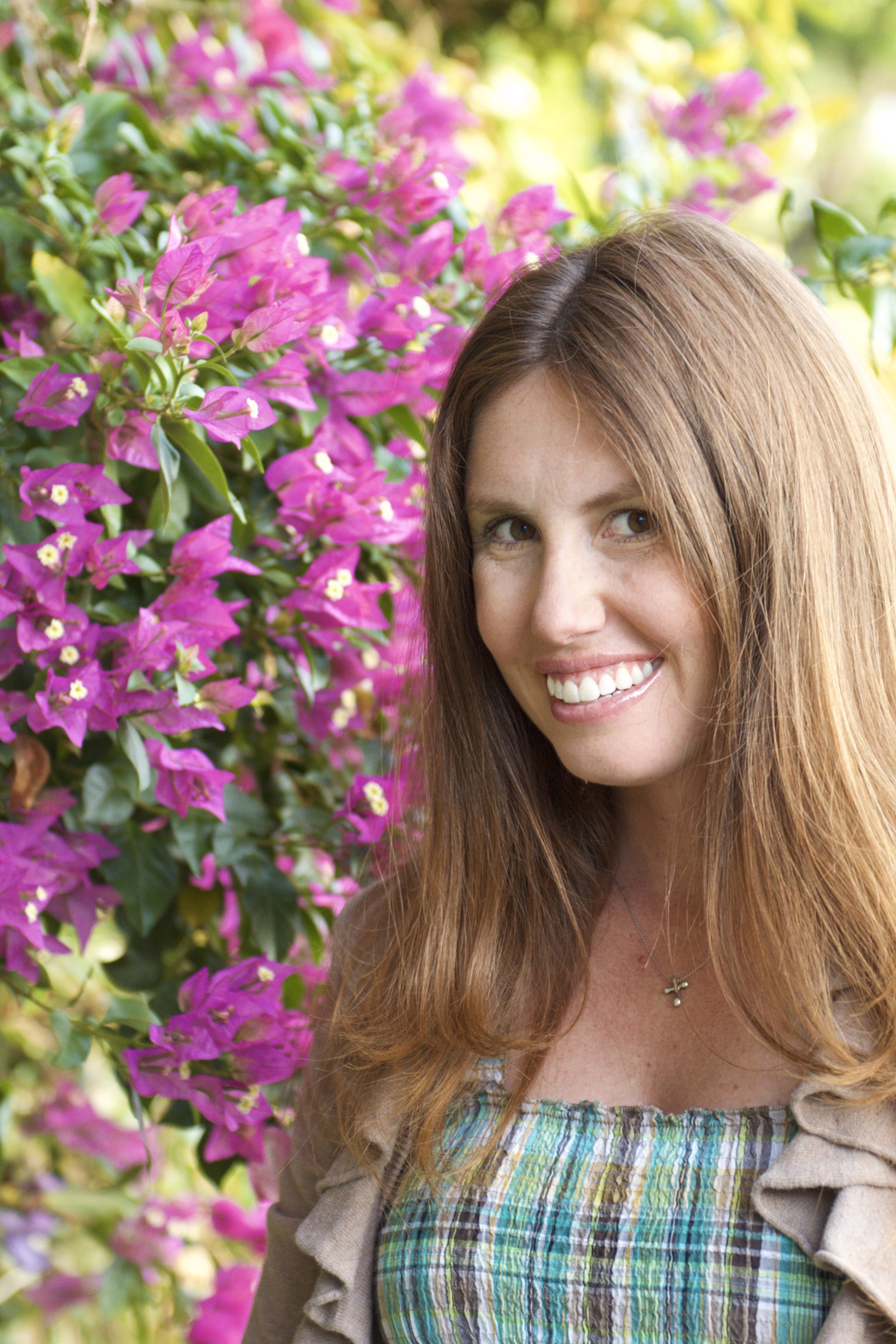