This has been an exhausting but wonderful Sunday for our family. Our youngest son Austin was baptized today. We were so incredibly blessed to have so many wonderful friends and family join us for this special day. Clint’s dad flew in for the occasion and several people drove an hour or more to celebrate with us! We were so honored by the effort everyone made. 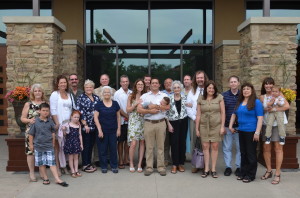 I do so love attending church surrounded by my loved ones. Everywhere I looked there was a familiar smiling face. Austin was in pretty good spirits during the mass, but it was challenging for Parker who was a bit wound up by seeing everyone, and of course it cut into his lunch and nap time as well. Fortunately we were surrounded by understanding people and had a lot of help. I also enjoyed the sermon today in which the priest discussed vocations– something that has been on my heart these past few months as I have been trying to figure out the best way to live my vocation and serve my family.
After mass, the baptism ceremony began, and I was concerned because Austin was in desperate need of a nap. My awesome husband was on it though, and Austin fell asleep drooling on Clint’s arm after only a few minutes. Austin slept through his entire baptism– even the part where the priest poured water on his head– amazing! Parker continued to struggle, so the grandpas took him outside to let him run off some of that energy. My brother Justin was Austin’s godfather (he’s Parker’s godfather as well) and did a wonderful job, of course. I like knowing that my boys will have someone who will always be in their lives, who will set an example of faith and love, and who they can feel comfortable talking to (old enough that they’ll look up to him but not so old that they can’t relate to him). It was a lovely ceremony, and I was soaking in the sweet smell of the oil of chrism on Austin’s head all afternoon. 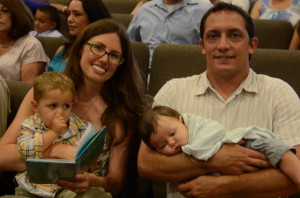 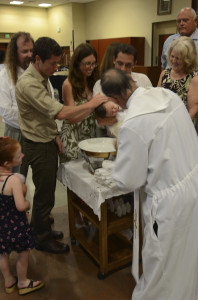 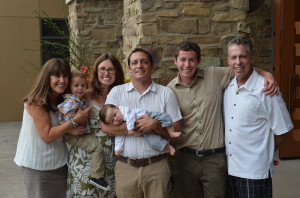 With my parents and brother (the godfather)

Clint’s dad with his mom and sister

After the baptism was over we headed across the street to share a late lunch. Parker was really falling apart by this point, but Clint had the brilliant idea to settle him down for a nap in Austin’s car seat– a little odd, but it worked. Trying to get kids to survive not only a mass but a baptism (we were at church for 3 hours) can be exhausting, but I felt like I was able to catch my breath at lunch and soak in all the wonderful people around us.

Austin playing with his Great Aunt Janelle at lunch 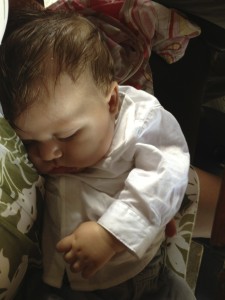 Crashed out after his big day

Thank you to all the people who made this such a special day for our family. We are so appreciative of the gifts of your love and support! 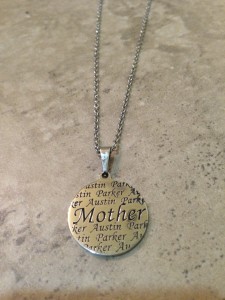 For the ladies of What I Wore Sunday, my dress I bought over 6 years ago from Macy’s (brand: City Triangles). I know the time frame because I wore it for my wedding shower 6 years ago. 🙂 My shoes I got from Cathy Jean several years ago (first time I’ve worn heals in quite a while… been living in my flats since I’ve been on maternity leave). My necklace was my Mother’s Day present from my mom and has the names of both of my boys on it (I’ve been pretty much wearing it every day since because I love it). For more, head over to Fine Linen and Purple. 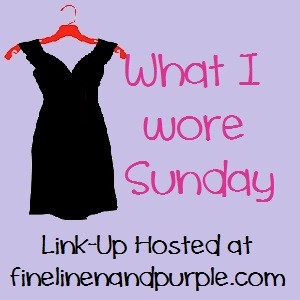