You would think that giving notice would mean I could finally take it easy at work, but I guess that’s not my personality. Instead I found myself even more crazy busy as I tried to hire and train a replacement and get as many critical issues wrapped up as possible. I imagine it’s not normal for someone to hire their own replacement. The way it worked out though was that my supervisor was going to be on vacation at the time we needed to interview the candidate, and fortunately he still trusted me enough to let me make the call. It’s a bit funny in an interview to explain that you’re leaving in a little over a week, but we were able to find a great candidate who wasn’t scared away by that. I ended up with three days to share with her eight years worth of experience, which is clearly not enough time, but it was way better than no time at all. When my last day finally rolled around I worked up until the end of the day, and then I walked around the office and said goodbye to everyone I could find. I eventually carried my few personal items to the car and left, but I think I win the award for the person who takes the longest to leave on their last day because I wasn’t out of there until after 6:00 on a Friday… sheesh.

My week off between jobs was great, but really I could have used a month or more to get my life in order. Our house was in desperate need of some deep cleaning. I was having someone help with the cleaning once per month or so before I went out on maternity leave in March of this year, but it’s been just me cleaning since then (or not cleaning, as the case may be). Why you ask? Well, so much was up in the air that our finances did not feel secure (and help with cleaning felt like a luxury we couldn’t afford); I wanted to focus more on serving my family; and sadly I couldn’t even get the house clean enough for someone to clean it once I returned to work. Thus, during my week off I straightened and cleaned and got the house to the point of being functional and acceptable again (such a relief!). I also got to some long overdue projects, like the thank you cards for my birthday in July (yikes). Then of course there were normal weekly chores like laundry. All in all it was productive… I just wish there wasn’t so much more that still needs to be done! I suppose that will be the case for a while. My focus for my week off was getting my life in order, rather than my usual focus of family time, but I still managed to squeeze in some time with the boys by dropping them off a couple hours later than normal for school in the mornings. I even got to attend their school Halloween party! And for the most shocking thing I did during the week… I cooked! Haha. I had been wanting to try this Cream Cheese Chicken Chili recipe that I found on Olvia’s site, and I finally had enough time to make it. It turned out delicious if I do say so myself… thanks again Olivia! 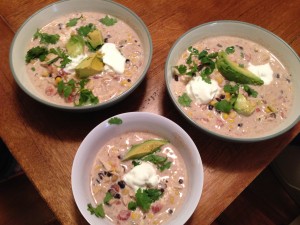 Who knew I could cook? 🙂

My wonderful week off ended much too quickly, and Monday I headed off to my new job. It has been an interesting mix of old and new: my old boss, an old account, some old reps… but a new sales team, new products, new accounts, etc. It’s been kind of perfect in a way: enough newness to make things interesting but enough familiarness to keep me from feeling totally lost. So far the products and people all seem great. It’s been surprisingly busy (what, is that my theme song or something?). I thought there would be more of sitting around checking out their website and other time fillers, but nope… it’s been a jump right in kind of job. I feel fairly comfortable in my new position even though I still have a lot to learn. I do miss the way I knew the products and the systems at my last company, but not as much as I expected to.

I’m not super thrilled with the commute so far. When traffic cooperates the commute can be slightly shorter than my old commute, but generally speaking I would say the drive time is about the same or slightly longer (traffic isn’t usually all that cooperative); and it’s generally less pleasant because now I’m on the freeway rather than on side streets. My first Thursday home with the boys was great though. Austin had a doc appointment that morning (that I didn’t have to take time off work for… yea!), and then the boys and I went to the local zoo. It was wonderful to get to spend a full day with them. I didn’t work from home my first Tuesday since it was only my second day of work, but I did this week. It was so awesome to not have to drive to work, and I enjoyed using that time to get a few small things done. There are a lot of distractions at home (so many things to do calling to me), so I had to really make a point of staying focused. Then at the end of the day, there was no long drive home… just time with my family! 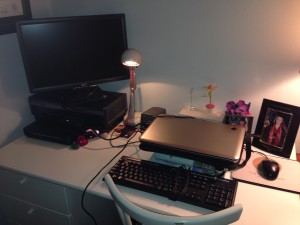 All in all, this job feels like it is a good fit, and I’m very amazed that after so much stress over how I could bring in the income my family needed while being able to actually care for my family in a non-financial sense, that my prayers have been answered in a way that I could have never imagined was possible.

I gave notice to my work today