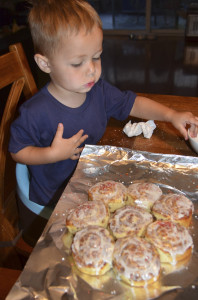 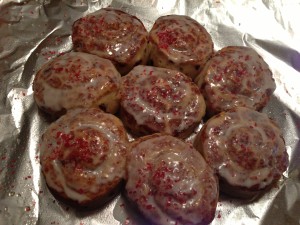 This year our 4th of July started out with cinnamon rolls that Parker decorated with red sprinkles. Then we headed out to join some friends for a 4th of July parade. Parker had fun bouncing around with the other kids and watching the floats and cars go by. Austin enjoyed the walk to the parade, but then slept through the majority of it. 🙂 On the walk back to our car we got snow cones, which took the edge off the heat. By the time we got home, Parker was asleep, so we put him in bed and Clint grilled up some hotdogs for us. Over lunch we caught our breath a little and played with the smiley Austin. When Parker woke up, we all hung out in his room for a little bit and then enjoyed the tri-tip Clint had barbecued for our dinner (well, Parker took a little more encouragement to enjoy it, but so it goes at dinner sometimes). Then it was bath time for the boys and off to the fireworks. The fireworks show for our city is near our house, so we walked down to a grassy spot in front of Wendy’s. Austin fell asleep on the way (sensing a theme?), but Parker was super excited about the fireworks. Shortly after we got there the show started, and as we watched Parker announced, “That was a loud one,” and “That was awesome!” With his short attention span he eventually became bored and started sniffing around the grass pretending to be a dog, lol. Once the show was over we strolled back to our house and put the boys to bed. 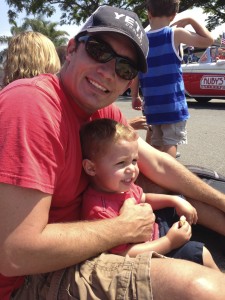 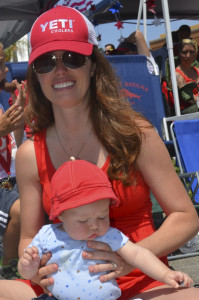 While Clint and I watched the fireworks tonight we discussed previous 4th of July’s. We realized we’d had some pretty great celebrations in the past (pre-kids). We were in San Diego one year for a weekend away, and another year we were in Orlando and left the next day on a fabulous Caribbean cruise. [We often celebrated particularly well because my birthday and our anniversary both fall around the 4th of July.] As I sat there with my boys and my dog on the grass, watching the fireworks and thinking back, I realized that even though this was a simple celebration, I was content. As much fun as Clint and I had when it was just the two of us, that life just doesn’t compare for me to the life we now share as a family. There are days when my kids test my patience and leave me missing my old less exhausting life, of course, but that old life was not just less exhausting– it was less meaningful as well. So today I not only celebrated this great country in which we live; I also celebrated the sweet simplicity of family.

Happy 4th of July everyone!