This past Saturday we took Parker to Disneyland to celebrate his 3rd birthday. Parker’s in a big Mickey Mouse phase right now, so for his birthday this year he requested to go see Mickey at Disneyland. For his first two birthdays we celebrated at the river with family and had cupcakes with his friends at school. This year I felt like he was old enough that we needed to have a “real” birthday party for him. I was thinking more like friends at a park than going to a theme park, but we have been wanting to take him to Disneyland anyway and what better excuse than his birthday? His actual birthday isn’t until September 1st, but fortunately a friend gave us a heads up that children are free before 3 years old, so we decided to go the weekend before his birthday. We will still be celebrating on his actual birthday with family as well as having a party at his school the Friday before his birthday.

I grew up fairly close to Disneyland, so I have been there many times with friends and family over the years. Going to Disneyland with kids though is a totally different experience! First it was all about the touristy stuff that I had always happily bypassed before. We had to stop within two seconds of entering the park because Donald, Goofy and Pluto were all there (with lines to take pics with them). We also did a number of other non-ride-related activities like playing in a fountain and exploring a tree house. Very different!

Many of the rides we did go on were a complete fail. It turns out Pirates of the Caribbean is a bit scary if you’re a kid. We thought ok, let’s head over to the kids’ section then and go on some more kid friendly rides. So Clint took Parker on Mr. Toad’s Wild Ride while I fed Austin, and apparently that is scary too. And Winnie the Pooh started off warm and fuzzy but then became stormy and turned into some neon colored twisted dream… what?!?! Disney, remember your audience! Why are you not kid friendly? As I thought about it I realized that their movies are the same way. There is always a dark part to it that is not at all kid friendly- at least not at Parker’s age. Shocking conclusion: Knott’s Camp Snoopy is way better for 2-3 year olds and much cheaper! Who knew?!

That being said, a couple of the rides were a complete hit. I got to ride on the Tea Cups with Parker. He had a big grin on his face the whole time and laughed when I spun the cup around. So fun! Also Clint rode on the Toon Town roller coaster with him, and Parker was totally into that as well. It turns out at Disneyland it is the indoor rides that are creepy. As long as we stayed outdoors we were good. 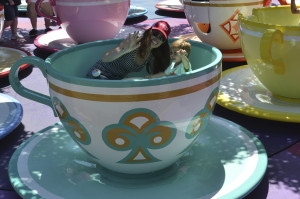 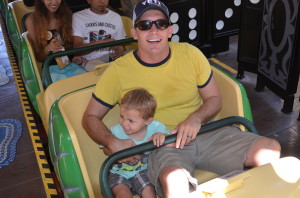 Meeting the characters ended up being one of the highlights of the day. With each character, Parker would approach with caution, but then the character would usually bend down to his level to make him feel more comfortable and before you knew it he was hugging them. All of the characters were great, but the look on Parker’s face when he met Mickey Mouse made the cost and craziness of the day totally worth it for me. 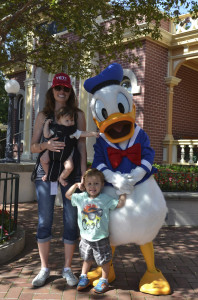 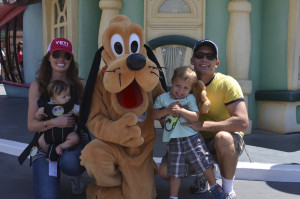 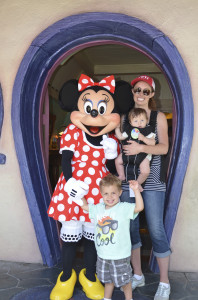 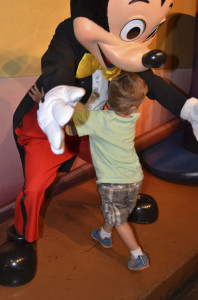 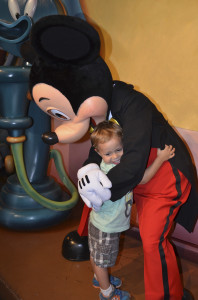 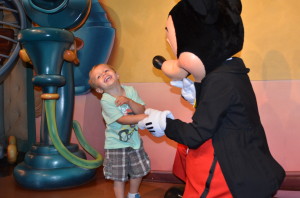 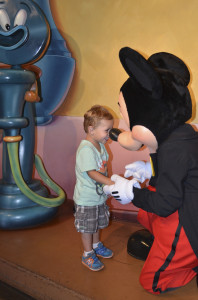 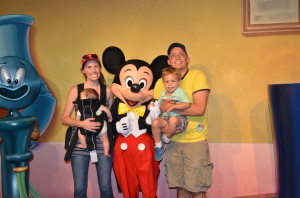 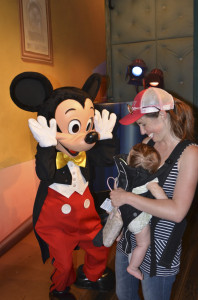 The pictures just say it all, don’t they? And you know what he said to Mickey? He asked him if he wore underwear! Oh my gosh, and it was totally my fault! In an effort to encourage him to do his morning potty check that day I asked him if he thought Mickey wore underwear. Oops! 🙂 And did you notice how Austin is grabbing at the characters in the pictures? We’re quite the group, huh?

We returned home in the afternoon so Parker could take a late nap, and then we came back for the evening shift. We watched part of the parade (I couldn’t make it through the whole thing and still have the song stuck in my head), went on the Jungle Cruise, had some dinner and watched fireworks. The time flew by and the fireworks didn’t start until 9:30, so it was an incredibly late night. Even though we left immediately after the fireworks, so did everyone else, which meant we didn’t make it to our car until shortly before 11:00! That’s not exactly ideal for young children and exhausted adults.

The next day we paid the price. My grandma’s birthday lunch on Sunday would have been a bit of a challenge under normal circumstances as it ran right into Parker’s nap time, but as Parker was still sleep deprived from Disneyland, he was in a totally wacky noodle place, oh my! The good news is I got a chance to recover from the craziness of the weekend as my mom and I had plans to go to the spa immediately after lunch to celebrate my mom’s birthday (my mom was my grandma’s favorite birthday present– her first daughter born only two days before her birthday). Massage for me, facial for my mom, and as much girl talk as we could squeeze in. Wonderful! 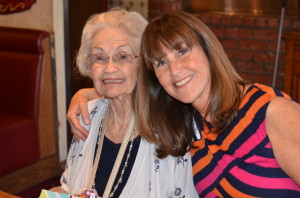 One other update before I leave you… the boys’ school was closed this past Friday for teacher prep, so I took the day off from work and soaked up some quality time with my boys. We went to the park in the morning, and Austin went on the swing for the first time. He loved it! Check out the cute pics I snapped: 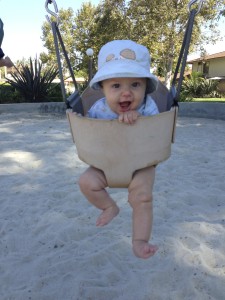 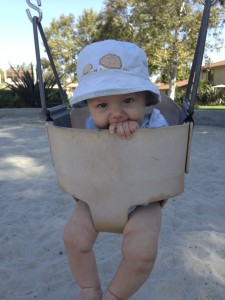 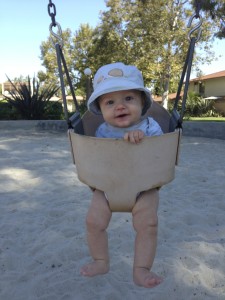 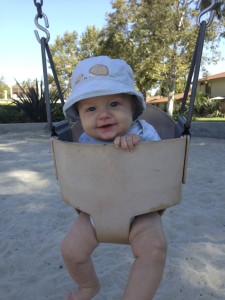 And the boys playing together :)… 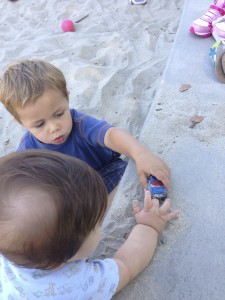 And look, Austin’s starting to sit up on his own for a moment here and there:

As if that wasn’t enough, Austin is also getting ready to crawl! I can’t believe it! Is it really time for that already? Wow! Check out how he’s getting into the crawling position: 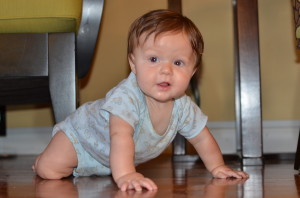 Even though he isn’t officially crawling yet, he’s moving all over the place between rolling and scooting. He’s my little mover and shaker these days!

Anyway, it was a busy but wonderful weekend for our family. I hope you enjoyed spending time with your loved ones too. Isn’t that what it’s all about?