[Fair warning: This is a birth story… if that kind of thing grosses you out, you may want to stop reading here] 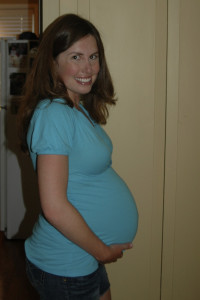 This is me on my due date

When I was pregnant with Parker I had the brilliant notion that I would work until just before my due date. He was due August 28th (2010), which was a Saturday, so I figured I would work until the Friday before. Ah, silly first time mom. It turned out that last week I couldn’t sleep at night, so that made it really hard to focus at work. I called my doctor on Tuesday morning, and I found out at 5:00 that afternoon that she wanted me to stop working. So suddenly there I was wrapping up the last few things and saying goodbye to my boss and coworkers. It was a really weird and emotional experience. But ahh, the next day… I felt like a totally different person after being able to get some sleep! Being home was so refreshing, and I was so happy to be able to have some time to relax and prepare before the baby came.

I was of the mindset that the baby would come when he was done, so I wasn’t overly anxious, but when the due date came and went it was very weird. My husband said something like, “We did the countdown and nothing happened.” It was pretty discouraging too when my husband had to leave for work on Monday. Then I woke up Tuesday the 31st to find a little surprise… my mucous plug had come out while I was sleeping. I did some quick research and realized that probably meant I would be going into labor soon. This news sent me into a bit of a nesting panic phase. Fortunately my mom was already scheduled to visit that day, and her presence helped me keep from going crazy. I would normally take a nap in the afternoon, but I didn’t that day because I was visiting with my mom. Then in the early evening my mom and I went on a walk with my friend. After the walk it was time for her to leave, but I remember feeling like she should stay. Nonetheless I waved goodbye and headed home to my husband.

My husband and I had a nice dinner together and watched my favorite show at the time, Covert Affairs. It had been a pretty busy day, so I was ready to head to bed a little early. I hopped into the shower, but shortly after I got out of the shower (about 9:00) my stomach started to hurt. I thought maybe I just had to go to the bathroom, but half an hour later I realized I was in labor. I quickly gave my mom the heads up as she and my husband were going to be my birth coaches.

During those first hours I snacked on some leftover wheat pancakes, touched up my toe nail polish, and even wrote in my journal. In the birth class they had talked about contractions that started off mild and were spaced 10-15 minutes apart. Apparently my body had other ideas. My contractions started off fairly strong and were only spaced 5 minutes apart. By the time my mom arrived (she lives a little over an hour away) the contractions were getting stronger and began coming as close as 3 minutes apart. Clint and my mom were already practicing their coaching skills by encouraging me to stand when a contraction came and helping me breathe through them.

About 2:00 in the morning we headed into the hospital. It was incredibly disappointing when they checked me and found I was only dilated 1 cm! The good news was that I was 90% effaced and the baby was very low. They wanted to measure the baby’s heart rate and my contractions, but they were having trouble picking up the heart beat because he was so low.  They asked me to lie on my side, which slowed my contractions down to 7-8 minutes apart. Then they took my blood pressure, and apparently it was a bit high even though my whole pregnancy I had never had high blood pressure.

That’s when the “freak out” began. They decided I was high risk now because I had high blood pressure and was past dates. I found the whole thing rather weird as I knew I didn’t have a blood pressure issue, and I didn’t understand why 4 days past my due date was a big concern. Suddenly they were talking about either giving me pitocin or sending me home against medical advice. I did not want pitocin– I was in labor and happy that I had gone into labor on my own. It would also be really frustrating to head back home. Fortunately the on call doctor agreed to let me wait until my doctor came on duty. When my doctor called in the morning I had to stop in the middle of our conversation to breathe through a contraction, and I remember her saying something like, “It sounds like you’re in labor.” No kidding! She decided to give me a few hours to show progress.

So my hospital experience had gotten off to a rather stressful, poking and prodding kind of start, but fortunately things got much better from there. I finally started to dilate, and the next nurse let me move around. I had pictured myself really working with the labor and using all sorts of fabulous birthing techniques. It turned out I was ridiculously exhausted though. Of course it was the one day I didn’t take a nap, and now I had been up all night… something that would be hard for anyone, but for a person that’s pregnant and in labor… rough. I remember thinking something along the lines of if I could just pause the labor and take a nap then I would be good to go. As there was no pause button available, my husband and mom kept encouraging me to stand and walk around to keep the labor progressing. I allowed them to drag me around the room, but what I really wanted was to just sit on the bed. When I was sitting, I would actually fall asleep in between contractions.

Most of my active labor I remember only in bits and pieces. Fortunately when I’m in labor I get in this zone where I lose track of time. I remember the sun coming up and then going back down, but other than that I had very little sense of time. There was this little red light on the video player that I would focus on during contractions sometimes. I can also picture my husband lying on the couch where he was supposed to be resting, but he was still timing my contractions and shortly was back by my side because he couldn’t rest when his was son was in the process of being born. My mom and my husband were ridiculously awesome at supporting me through every contraction– giving me juice and water, breathing with me, massaging me, whatever I needed. All was going relatively well until I got stuck at 7 cm of dilation. After 5 hours I still had not made any progress and the evening was rolling in!