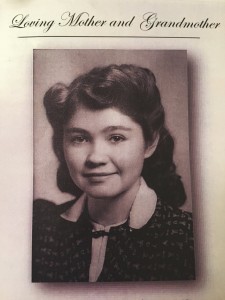 My grandma was that person that was always there. She babysat me for a little while when I was just an infant and my mom had to return to work. She took care of me when my parents went on vacation. She picked me up from school when my brother was born to take me to the hospital. She was the center of every family event (in a large crazy family the one thing everyone could agree upon was how much we loved her). My grandma was there when I got married, and she was there when each of my kids were born… until now. My grandma passed away on June 22nd, exactly two months before her 90th birthday, which would have been today, August 22nd. Today we should have all been gathered at Mimi’s to celebrate (the official restaurant for family gatherings) or perhaps having the big birthday bash my mom wanted to throw for her. I should have been trying to juggle my kids while attempting to eat and socialize. Whereas that may not be the way of things, I’m going to still spend the day with my grandma by celebrating her with my words. I am also fortunate that today I was able to celebrate another year with my mom whose birthday was the 20th. My grandma said my mom was her best birthday present ever. 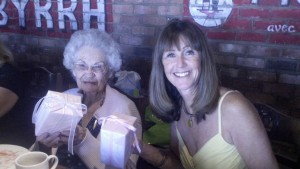 My mom and Grandma celebrating their birthdays together 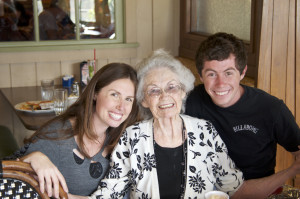 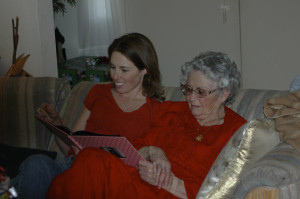 Showing my grandma the engagement album that Clint made for me 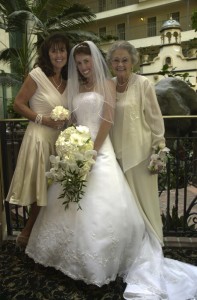 With my mom and grandma on my wedding day 🙂 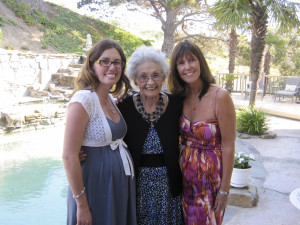 Mom and Grandma at my baby shower for Parker

When I was a child we jokingly called my grandma the Junk Food Grandma because she loved sharing a box of Entenmann’s with us or making us a pitcher of Koolaid. The closest thing to healthy food we ate at her house was cheese bread (that was a slice of sandwich bread with cheese melted on it in the microwave… a very complicated dish). I loved playing with my grandma’s dogs, and when we took them on a walk, it was hard to tell who was walking who. As I got older, my grandma became that person that I looked to as a beautiful example of what it meant to be a mother and grandmother… of what it meant to love. She gave me the gift of a large family… so many aunts and uncles and cousins… and I love it! That gift is part of what helps me to embrace motherhood. 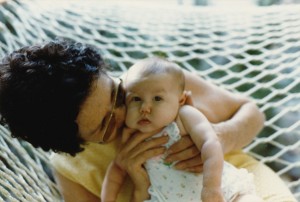 My grandma loving up on baby me 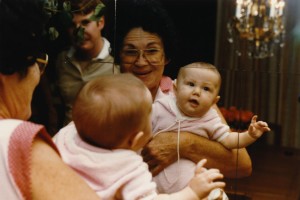 Grandma playing with me in the mirror

I don’t know how to accept not being able to see my grandma or hold her again for the rest of my time on this Earth, so I pretty much ignore that new reality until circumstances force me to face it. Her funeral was a good example of such a circumstance. All my grandma’s kids and grandkids processed down the aisle at the beginning of the service, following her ashes. Between the priest’s remarks, the sprinkling of her ashes with holy water, a very special family song playing as we walked, and plenty of pregnancy hormones, I was in tears before I even reached my seat. The service was just perfect though, and I was fortunate to be able to host the reception for her (with a lot of help from family and friends). People thought I was crazy to take on such a thing so far along in pregnancy, but my grandma would have done anything for us, so it felt like the least I could do to say thanks for all that she had done for me over the years. 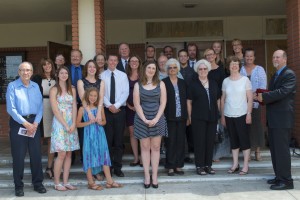 So many people gathered to honor Grandma

Today as I think about my grandma, I am very grateful for the time I got to spend with her at the end. As you probably know by now, I lost my job back in January. Whereas losing a job is never fun, one good thing that came out of it is that my boys and I were able to see my grandma regularly. I remember going over to my grandma’s house right after my ultrasound appointment in early March to tell her that she was going to have her first great granddaughter. My grandma was so thrilled when we told her we were expecting, and of course was excited to share in our gender news that day. We told her that we were considering the name Audrey, which was Clint’s great grandma’s name. Even when other things were slipping her mind later, she remembered Audrey’s name and always asked about her. The day that we shared the gender with my grandma she was just eating breakfast in her room, and everything seemed normal. Only a few days later I saw her at my cousin’s wedding. I wouldn’t have guessed then that she would take a fall shortly thereafter that would land her in a rehabilitation facility. 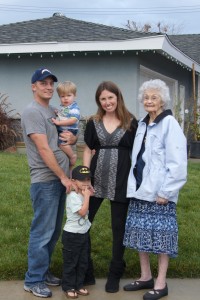 The boys and I had many special moments visiting my grandma. I got to feed my grandma when she was temporarily hospitalized while my boys scared her by climbing around the window. I got to witness the tender way my mom cared for her mom. The last time I saw my grandma, she was the strongest and most clear headed she had been since her fall. My Aunt Kathy and cousin Rose arrived while my mom and I were there, making the visit extra special. We all chatted happily. My grandma has always loved having as much of her family around her as possible, so she was thoroughly enjoying us all being there, but she was so exhausted that she started to fall asleep in her chair at the end. She didn’t want to be moved to her bed though because she wanted to be a part of things… she wanted to keep enjoying that moment. That day was such a gift, and it almost didn’t happen. The boys and I had gone to a midwife appointment and then stopped by their old preschool to visit some friends. We were just leaving the school when my mom invited me to come join her for a visit with my grandma. I started to text her that I needed to get the boys home for nap, but before I pressed send something stopped me (now I figure it was an angel). I called my mom and decided to go after all. All those visits were not only special for me but also for my boys. Now Parker knows exactly who his great grandma is, and he understands that the time came for her to go to heaven. And you know what he said when I told him… he said she wasn’t going to get to hold Audrey when she was born, which was one of my first reactions as well. 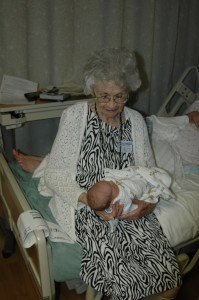 My grandma never gave up on life. She kept fighting to be here for us, but the time came for her to go home. I know my grandma is watching over all of us now, and there is a comfort in being able to talk to her whenever and wherever I want… conversations not obscured by her failing health. I’m glad she’s not in pain anymore and is finally reunited with her mom (who died when she was 6), her sisters (all of whom were older and passed before her), and her husband (who died when she was in her sixties). And as much as I would love to see her holding her great granddaughter in her arms, I know she can see her and loves her very much.

I could go on and on about my grandma, but the most important thing for you to know about her is that she put her faith and her family first, and she loved all of us unconditionally. I’m going to borrow a phrase from my Grandma and say, I love you to pieces Grandma and more than the whole world! 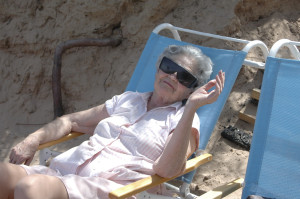 In Memory of Jim and Pam Fraser and their Forever Love

In memory of our loving Cider dog